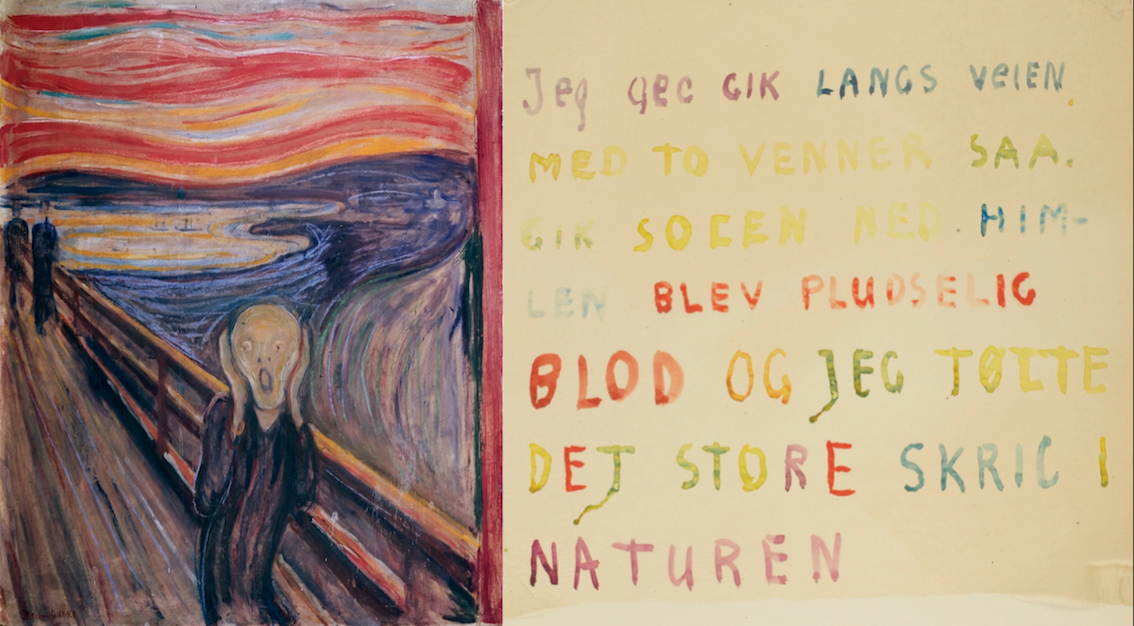 Munch’s The Scream is an icon of modern art, and one of the world’s most famous art works. Munch wrote several texts about the Scream motif, the most poignant among these being: “I felt a huge unending scream course through nature”. The image has come to represent an expression of existential anxiety and despair of modern man.

See the Deutsche Welle TV documentation about the Scream as one of the icons of art history, where also Lise Wulff features with the Scream from Nature >>>.

The Scream is part of a series of paintings that Munch was to call The Frieze of Life. The pictures are tied togheter in terms of subject matter and form, and focus on existential topics such as love, pain, anxiety, jealousy and death.

Munch returned to several of the subject in The Frieze of Life during a 30-year period. As for the Scream, he made two oil paintings, two pastels and numerous prints, between 1983 and 1910.

The symbolist view on nature

When Munch is saying that he feels a scream through nature, he shows a form of identification with nature, and a form of personification of nature.

Edvard Munch’s writings about the Scream, translation of the painted text on top of the page

A kind of borderlessness – elements floating in and out of each other – is typical for the symbolist art at the late 19th century. There was an interest in energy; energy lines and the energy fields, and the mystic plasma – as a kind of invisible structure where things happened without concrete form.

The interconnectedness between human and nature, can be seen in Munch’s work. For example, the hair of a woman intertangles with the branches of a tree. Persons are melting into each other in the Kiss. Actually, they are not only meling into each other, in his woodcut they are also melting into the material itself – you can see the structure of the wood is litterally floating into the persons. Strong energy lines are shown in the Sun, making something invisible beautifully present.

Symbolist painters believed that art should reflect emotions or ideas rather than mere representations of the natural world. Munch’s intensely personal style is often referred to as Symbolic Naturalism.